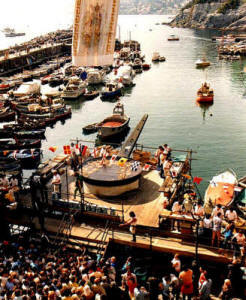 The Sagra del Pesce ( Fish Festival) in Camogli has become one of the most anticipated event in town over the years. The festival has a long tradition – it was first held in 1952 to celebrate the patron saint of fishermen , San Fortunato, by doing a mega fish fry and has been held every second Sunday in May in Piazza Colombo since then.

In the first year the fish fry was done in six small pans which doubled in number the year after and in 1954 they were all replaced by a single large skillet which has fittingly become the symbol of the Festival. Nowadays, the huge frying pan has grown to some impressive measurements – it is made of stainless steel , is 4 meters in diameter, has a 6-meter handle and weights a total of 28 tons with a capacity of 2000 litres.

You can admire the first two gigantic pans used for the festival while strolling along Largo Simonetti where they are displayed since the 80’s on the wall of the street.

The fry-up is held onto special scaffolding built in Piazza Colombo in the charming old marina where special frying baskets are lowered into the large pan to fry the fish which is then offered to the public.

The atmosphere of the event is really intoxicating, full of fun and lovely smells. No wonder it attracts thousands of visitors from all over Italy and abroad each year!